Operating Principle of Ultrasonic Flaw Detector- How They Work? 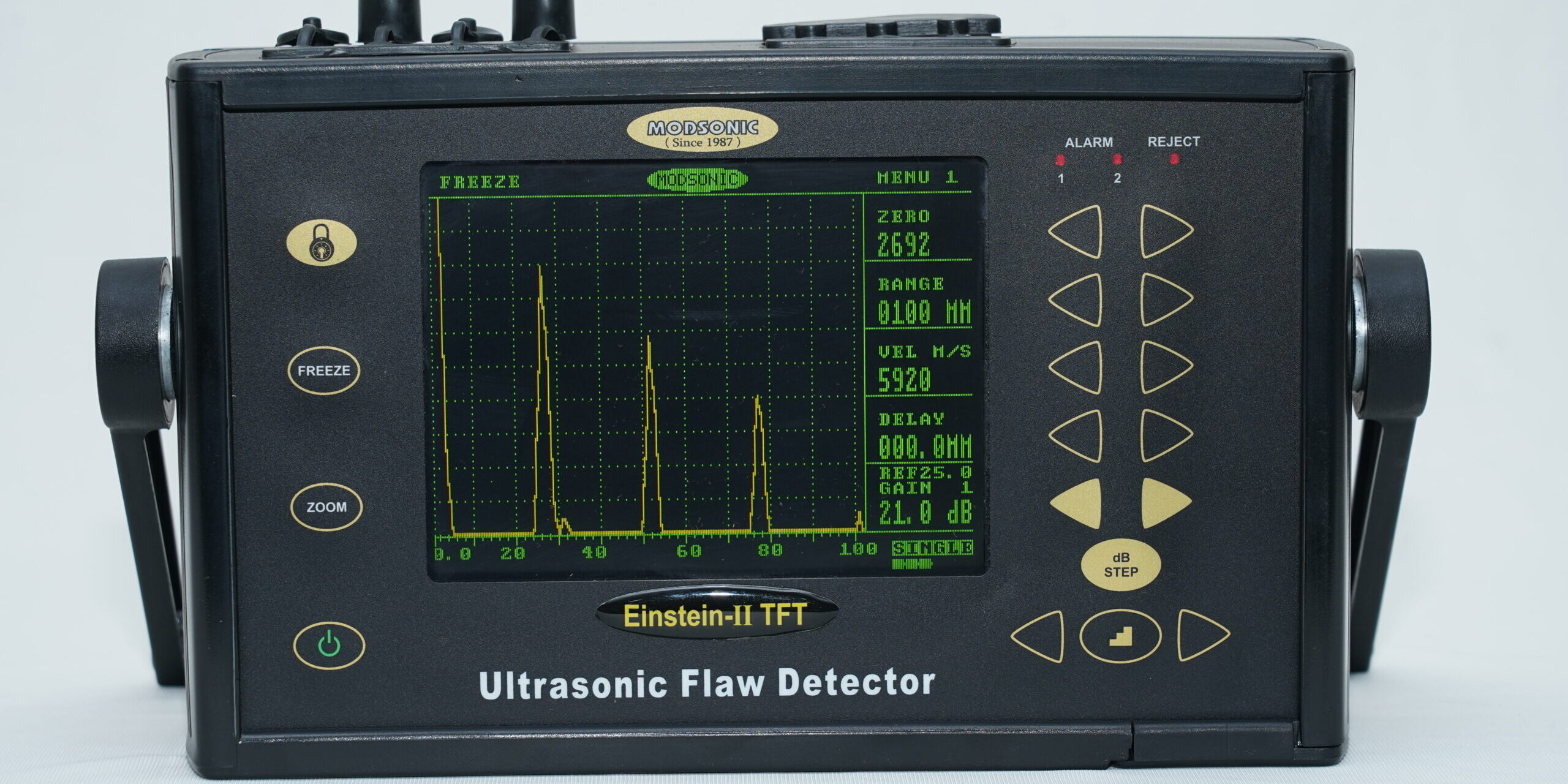 Ultrasonic testing (UT) is a type of inspection technique that is non-destructive. It includes the transmission of ultrasonic waves through an item or substance. High-frequency sound waves are moved through the substance in order to detect the flaws or characterise the material. In this post, we will discuss the operating principle of ultrasonic flaw detector machine. Before heading to the operating principle, we must know what ultrasonic testing is, its theory, and its procedure.

What is Ultrasonic Testing?

Ultrasonic testing is the oldest and most widely accepted testing technique to detect flaws. The law of physics that controls sound wave propagation through solid materials has been utilised since 1940 to detect hidden fractures, gaps, sponginess, and other inner discontinuities in metals, composites, polymers, and ceramics.

In this technique, high-frequency sound waves are transmitted through the metal and indicate defects in predictable manners, resulting in different echo patterns that portable devices may show and record. Ultrasonic testing is a well-established technique used in many manufacturing, process, and service sectors, particularly in applications requiring welds and structural metals.

Sound waves are properly arranged mechanical oscillations, moving through a material that may be any state of matter, including liquid, solid, or gas. These waves will move through a particular medium at an actual speed or velocity in an expected direction. When they touch a boundary or surface of a different medium, they will reflect or transmit on the device. This is the physical concept on which ultrasonic flaw detector machine is based.

The Procedure of Ultrasonic Flaw Detection

Ultrasonic flaw detector machine is a compact and portable device with microprocessors. The device shows an ultrasonic waveform that may be better understood by a skilled operator who discovers and classifies flaws in test components. The ultrasonic flaw detection suite contains a waveform display, an ultrasonic receiver, a data recording module, and signal collection and analysis software. The transducer’s performance may be improved by adjusting the pulse amplitude, damping, and shape. Similarly, receiver gain and bandwidth can be adjusted to enhance signal-to-noise ratios.

A skilled operator will understand specific echo patterns connected to echo response from representative defected and fine sections. This can be done by proper utilisation of standards testing procedures along with a sound understanding of sound wave propagation. Ultrasonic flaw detection technique utilises two calibration measures, including straight beam testing and angle beam testing and the angle beam testing technique is commonly used in weld inspection.

There are different ultrasonic devices to detect flaws. However, the pulse reflection ultrasonic flaw detector has been extensively used in the actual fault detecting procedure. In general, the existence of flaws in materials causes material discontinuity, which often leads to inconsistency in acoustic impedance. It can be detected by ultrasonic flaw detector machine. Let’s make it more clear by knowing how they work.

The operating principle of ultrasonic flaw detector is as follows:

The reflection theorem states that an ultrasonic wave will reflect at the interface of two different types of medium with differing acoustic impedances. The reflected energy is proportional to the differentiation in acoustic impedance between the two sides of the contact, as well as its direction and size. Pulse reflection ultrasonic fault detectors are designed on this principle.

For instance- suppose a steel workpiece has a defect. As a result of this flaw, an interface is formed between the flaw and the steel substance. The acoustic impedance is different between the two sides of the interface. When the transmitted ultrasonic wave collides with this interface, it reflects. The signal collector receives the reflected energy, and a reflected wave is displayed at a certain place on the screen. The depth of the flaw in the material is represented by this point on the abscissa. The height and form of the reflected wave change with different flaws, reflecting the defect’s qualities.

There are two widely accepted methods of ultrasonic testing.

The same transducer transmits and collects sound wave energy during pulse-echo testing. This technique utilises echo signals at an interface, such as the back of an item or a flaw, to reflect waves back to the probe. The results are displayed as a line plot, with an amplitude on the y-axis reflecting the intensity of the reflection and a distance or time on the x-axis representing the signal’s depth through the material.

Through-transmission testing uses a transmitter to send ultrasonic waves from one surface and a separate receiver to collect sound energy from the opposite side of the object. The quantity of sound is reduced due to material flaws that help to locate the flaws.

The Advantage of Ultrasonic Testing In Flaw Detection

Ultrasonic testing offers a wide range of uses in industry, including determining the goodness of a material or component. This might include checking welds to see whether there are any gaps. This testing may be done on both ferrous and non-ferrous materials, as well as thicker parts and those that can only be reached from one side. Ultrasonic testing can also identify miner as well as planar flaws that radiographic testing cannot.